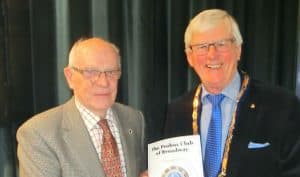 Vic Sutton became our first member to be awarded Life Membership under a change to the club constitution at the AGM on 6 July 2017. Vic has been a club member for 31 years having joined way back in January 1986. To become a life member requires having been a loyal member of the club for at least 20 years and also be a nonagenarian. Life Members are eligible to attend meetings of the club whenever they wish, without paying a subscription, for the remainder of their lives. 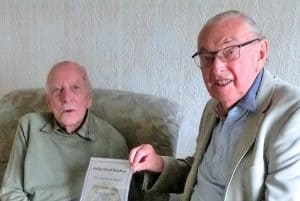 Our second Life Member to be awarded his certificate is Jim Clark. Jim joined the club in 1998 and was President in 2005/6. Before retiring he was Broadway’s Postmaster for ten years before taking over the Malvern Area. He retired back to Broadway in 1985

Eric started his career at 17 volunteering in 1943 for the Royal Navy and served in the Atlantic, Artic and Pacific Oceans. Post war he declined a university entrance to join a branch of the Foreign Office – a forerunner of GCHQ. Next he worked as Sales Engineer becoming Marketing Director for a US company with 1600 employees in Devon responsible for sales in the UK, Middle East, Australia and New Zealand. Resigned in 1975 when US owner elected to close UK factory and transfer production to low labour cost country. Eric started three companies in Evesham and Malvern, creating 150 new jobs in Worcestershire. Sold out to Australian and Swiss companies and retired in 1990. Eric joined Broadway Probus Club in 1993. He says ‘Sadly, I lost a wonderful wife and partner in 2016’.